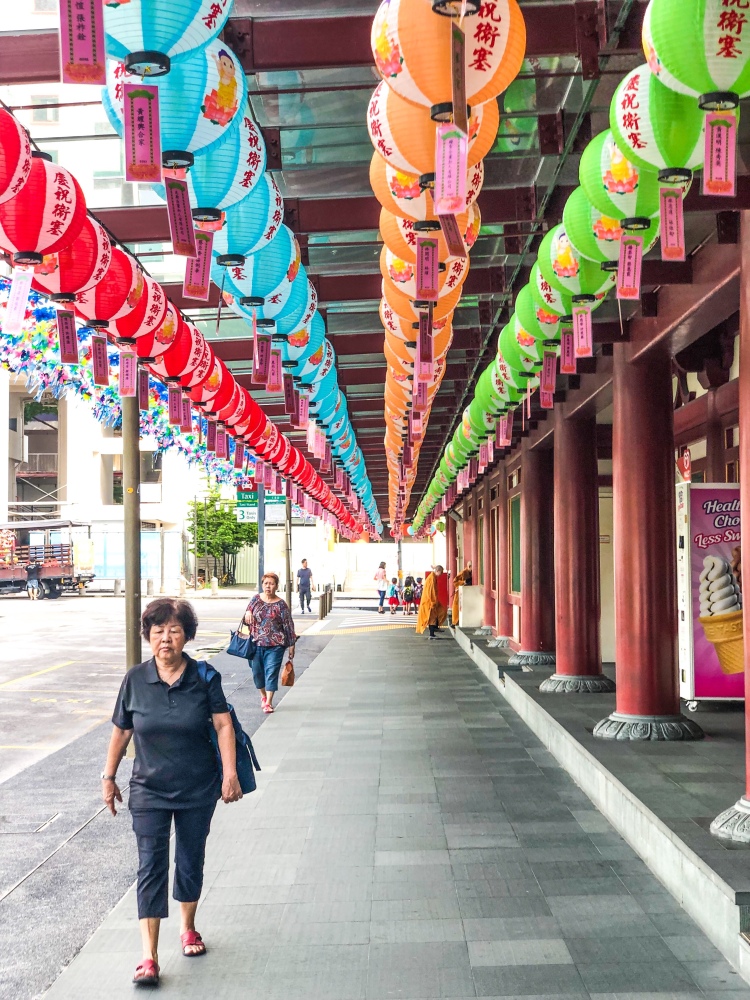 Last May I scored a round trip flight to Hong Kong for under $400!! (Thank You Scotts cheap flights!) I didn’t think I’d like HK so I planned for most of my trip East to be spent in Singapore because it looked way cooler (more on that in the HK post). Asia in general has never ever been on my list of must visit areas but I was peer pressured by my coworkers, it was such a great deal and I also really liked Crazy Rich Asians so why not? 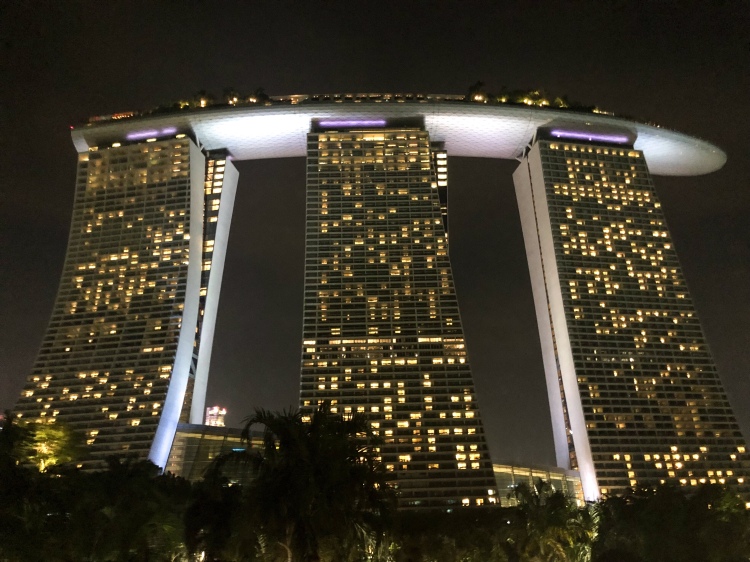 I spent 4 days solo exploring in Singapore and I split my time at two different areas of the city. The first two nights I stayed at the M Social hotel that was more south west of the main attractions but close to a metro station and within my budget. I loved it, It is not your typical hotel room design and the vibe of the entire hotel was super cool and hip. They have several different layouts including a loft design that I’d definitely try next visit. Breakfast was included with many different options including a omelet robot which was amazing.

My next stay was at the Hotel Indigo Singapore Katong, this was my splurge of the trip. I like to stay in the under $150 range when it comes to lodging but the rooftop pool, room design and views were tots worth it! I mean look at this!! 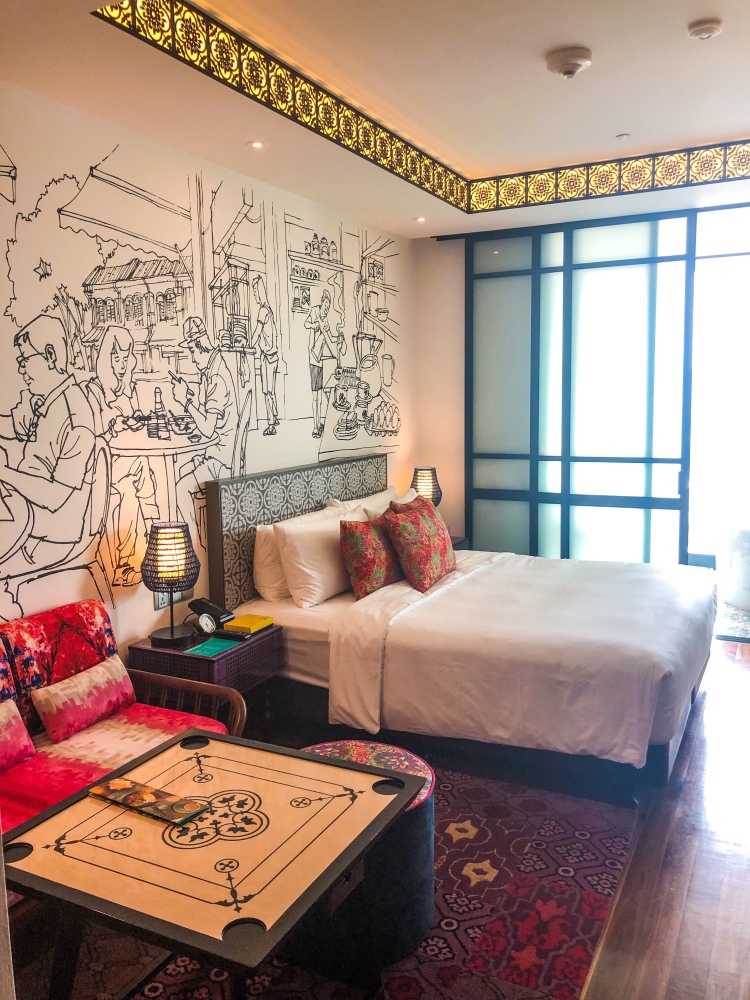 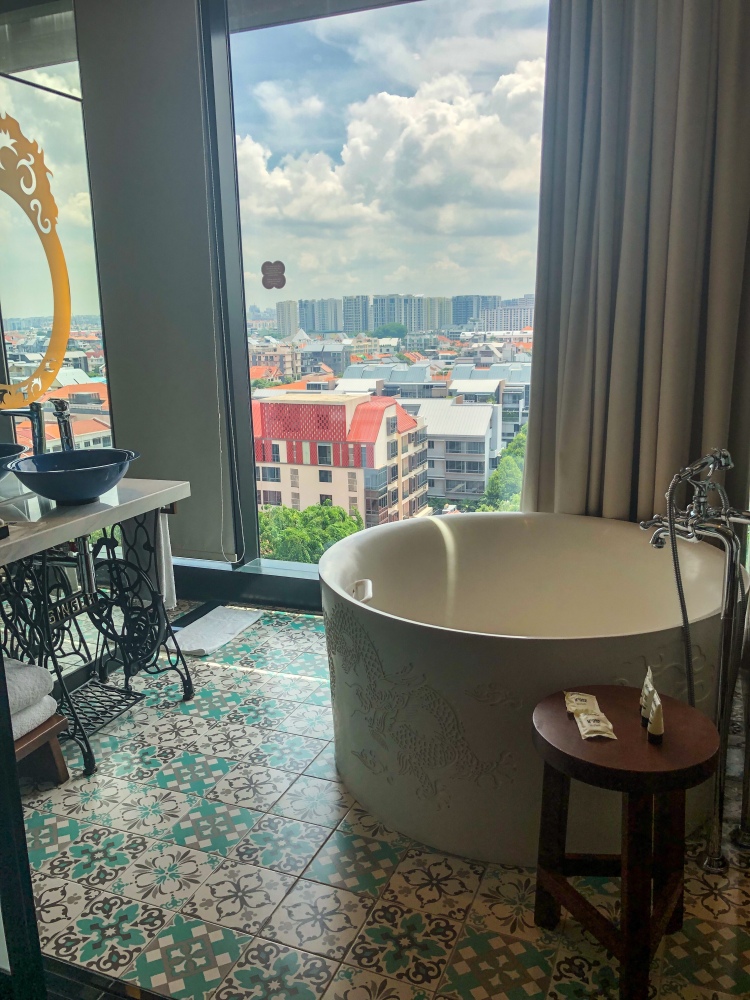 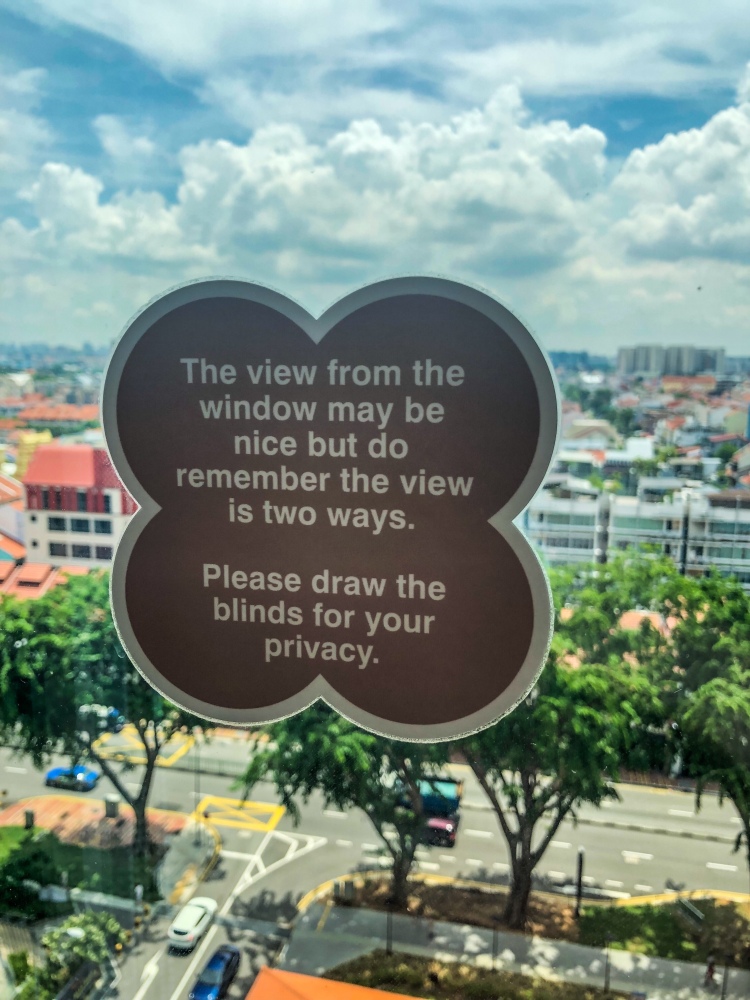 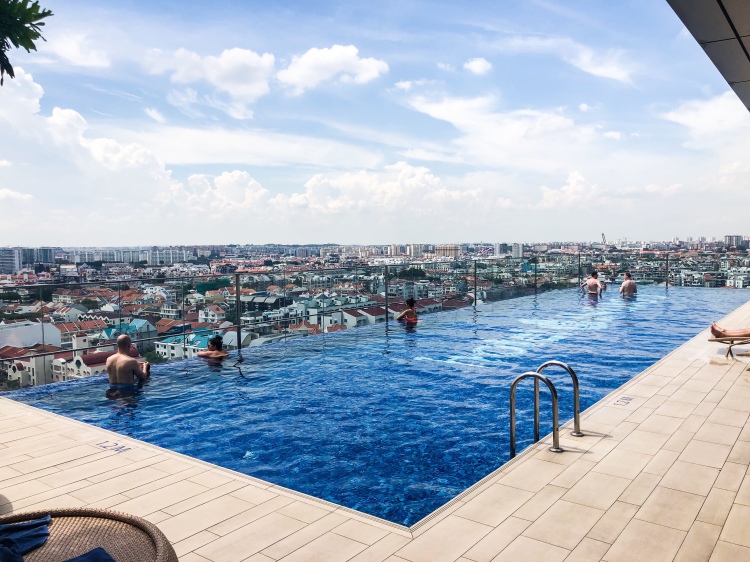 Disclaimer, I was sick this entire trip and it was a total bummer! It was like some crazy extreme allergies and If I didn’t stick out like a sore thumb already being a 6ft tall white girl, add in some nonstop sneezing, watering eyes and nose running like waterfall and trust me I was like a tourist attraction. That being said it did affect my sightseeing and overall spirit unfortunately so I didn’t get to see and do as much as I had planned in my short stay. Singapore is Expensive!! I had heard it was pricey but people say that about a lot of places, they’re not exaggerating when it come to the Garden city. However, if you book attractions through Klook you can save a fair amount of money and you save time by booking online in advance.

Top of my list was Gardens by the bay, it’s one of the number one things that pops up when researching Singapore with its futuristic avatar like trees and amazing greenhouses. The first night I was there I was just wandering around without any plans and happened to wander into the grove as the nightly light show was happening. Every night at 8pm the trees come alive to some lovely 80’s music lol it was a fun experience but make sure you are there ahead of time to find a spot to sit and enjoy the show.

I booked tickets for the exhibits the next morning and the key is to be the first in line. I was there about half an hour before they opened and they actually let me in about 10 mins early which was so awesome! They have a rainforest dome and a general garden dome, I heard the garden one got busy quicker so I did that exhibit first. 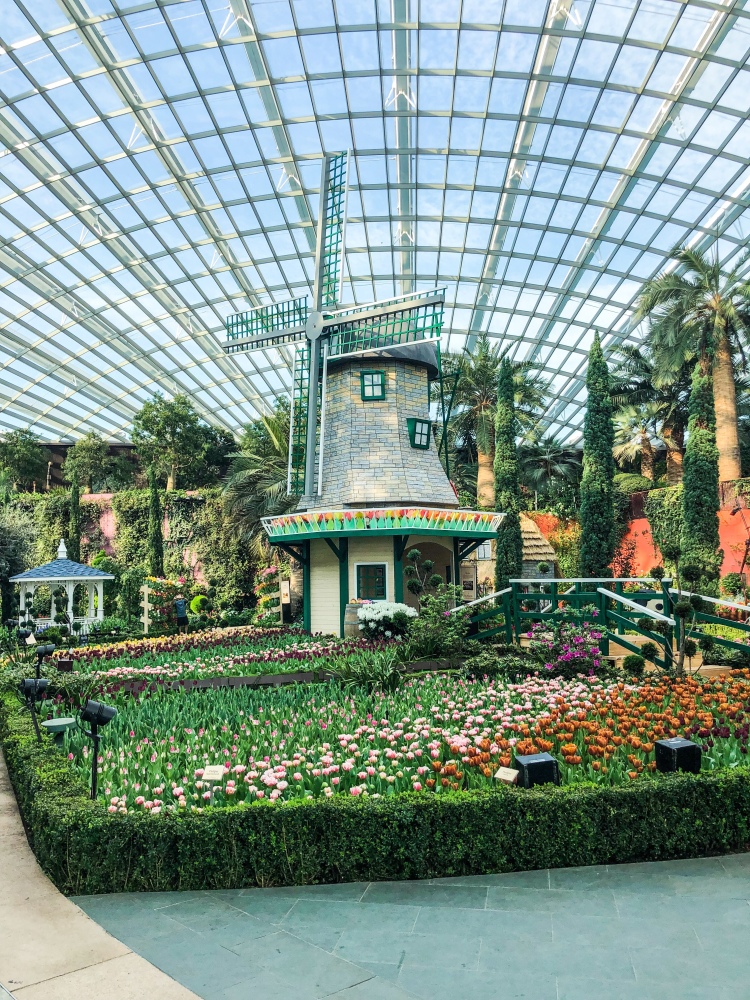 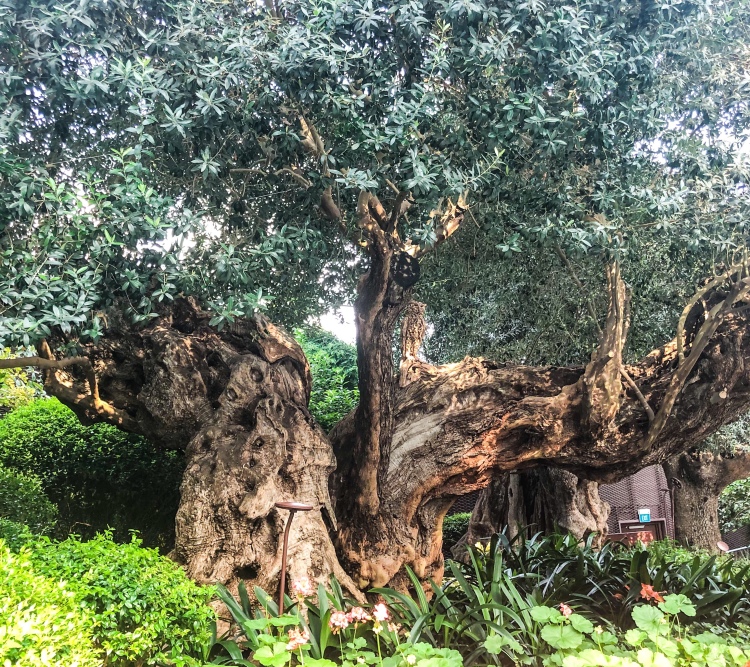 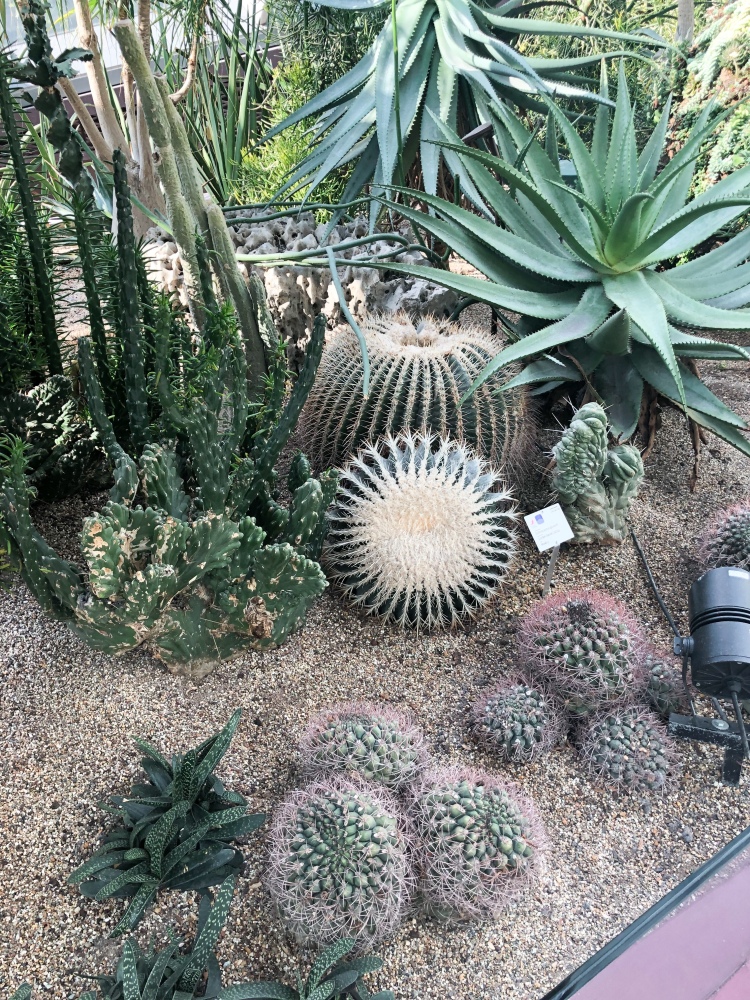 I LOVE plants, my apartment has a plethora of them and I call them my plant babies so I loved seeing all the different landscapes. Each section of the dome is divided by location, there was a Mediterranean, African, desert, middle eastern, and a really awesome tulip festival display. I practically had the place to myself and I was in plant heaven. (I had grand plans of using my tripod in the domes however the part that holds my phone busted on the flight over) 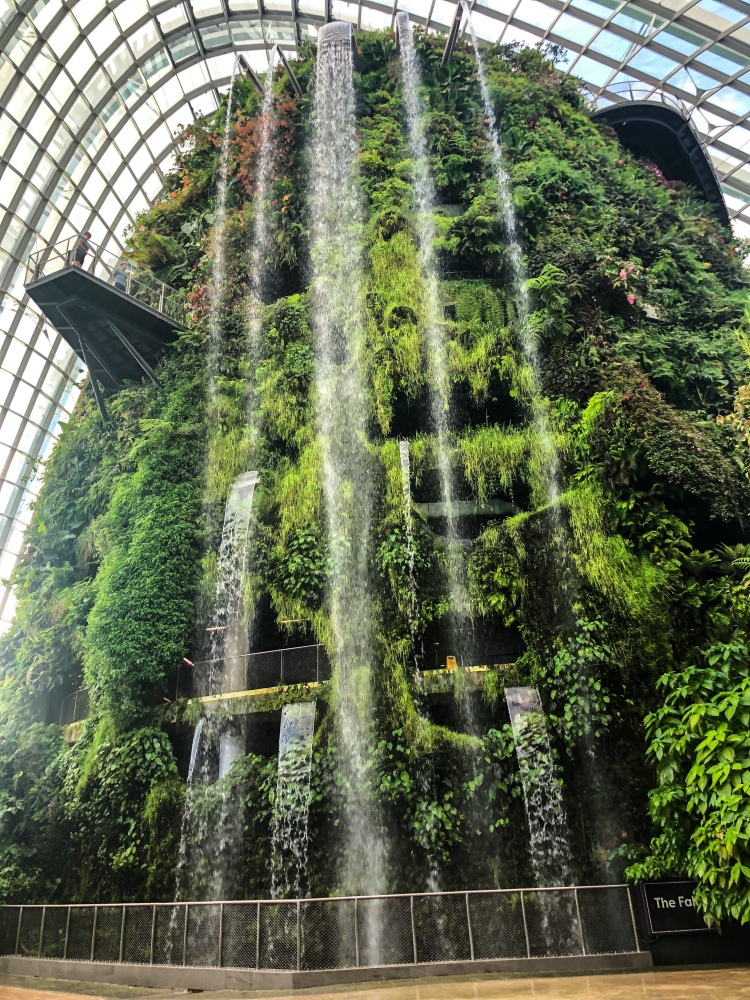 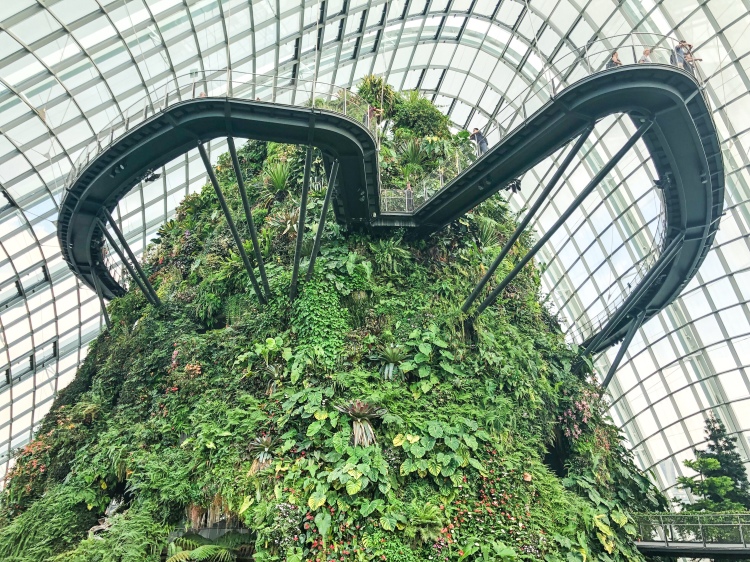 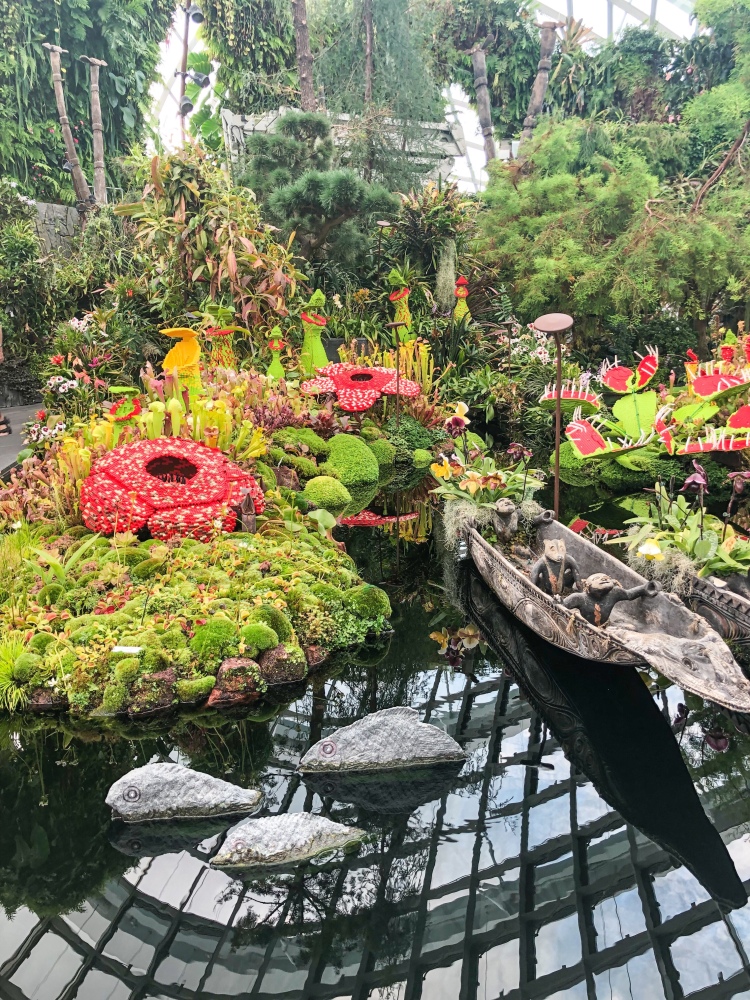 Next was the rainforest dome and OMG it was Magical! You walk through the doors and the first thing you see is this massive Waterfall, I actually think it’s the tallest indoor waterfall in the world, don’t quote me on that but I think that’s what I read. Thankfully it was still pretty early and I was practically alone beside some people doing a photoshoot. 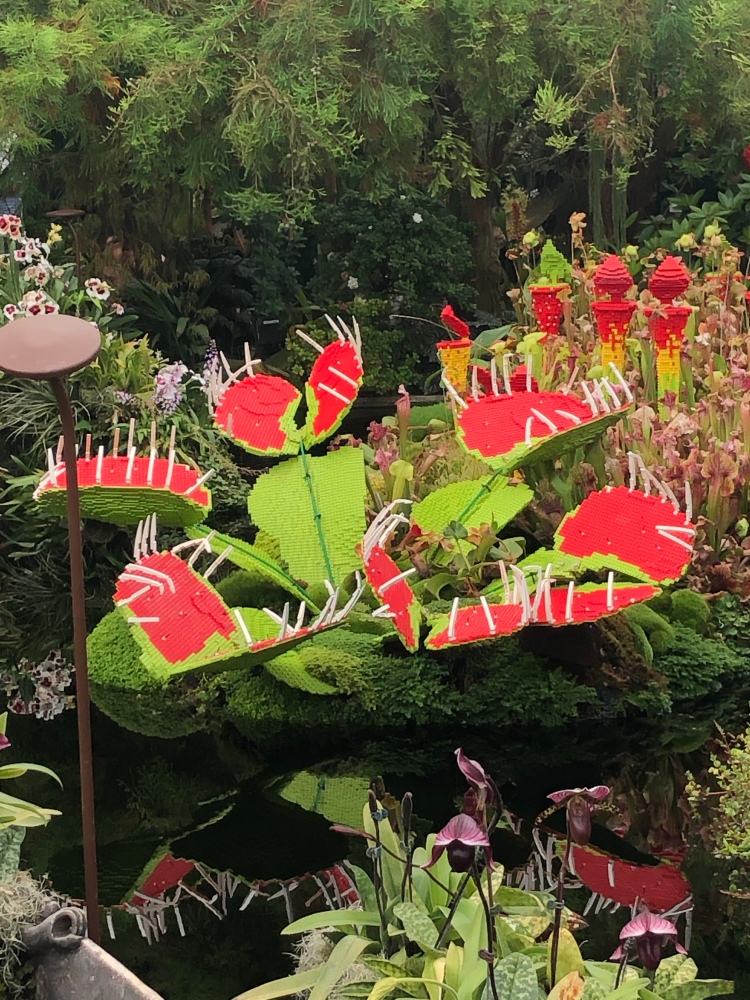 So you start on the bottom layer and work your way up into this massive mountain covered in tropical and amazingly lush vegetation. I took like a billion photos because everything was so beautiful! I also saw my first squat toilet that I had been warned about, thank goodness there were normal toilets available haha 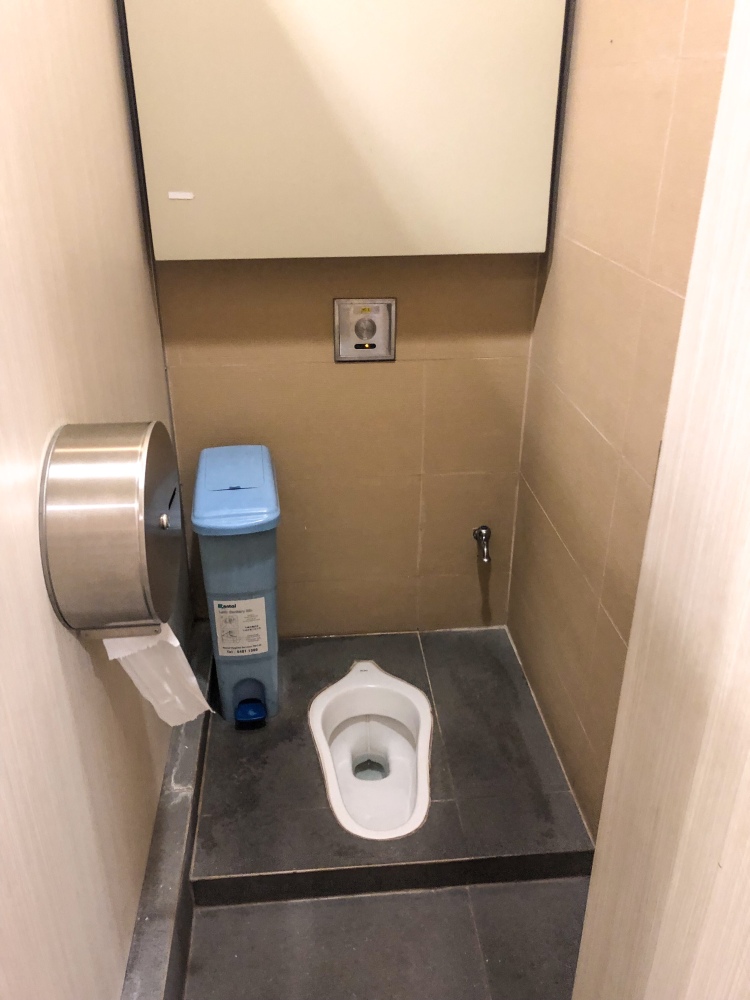 Gardens by the bay also had an exhibit called the flower dome while I was there and jaw drop!! You have to book this ticket separate from the other exhibits and its by time slot, and you get an hour in the dome. I joined a time slot towards the end of the hour but it actually worked out really well as most people line up at the beginning and you don’t need a full hr to see everything, so again I was almost by myself!  I love Gerber Daisies and the whole entrance way was the most beautiful colorful display, there were tons of moving displays and being that Singapore is the land of Irises, they were everywhere and, in every color, imaginable. I think this dome rotates through exhibits but I highly recommend the flower dome! 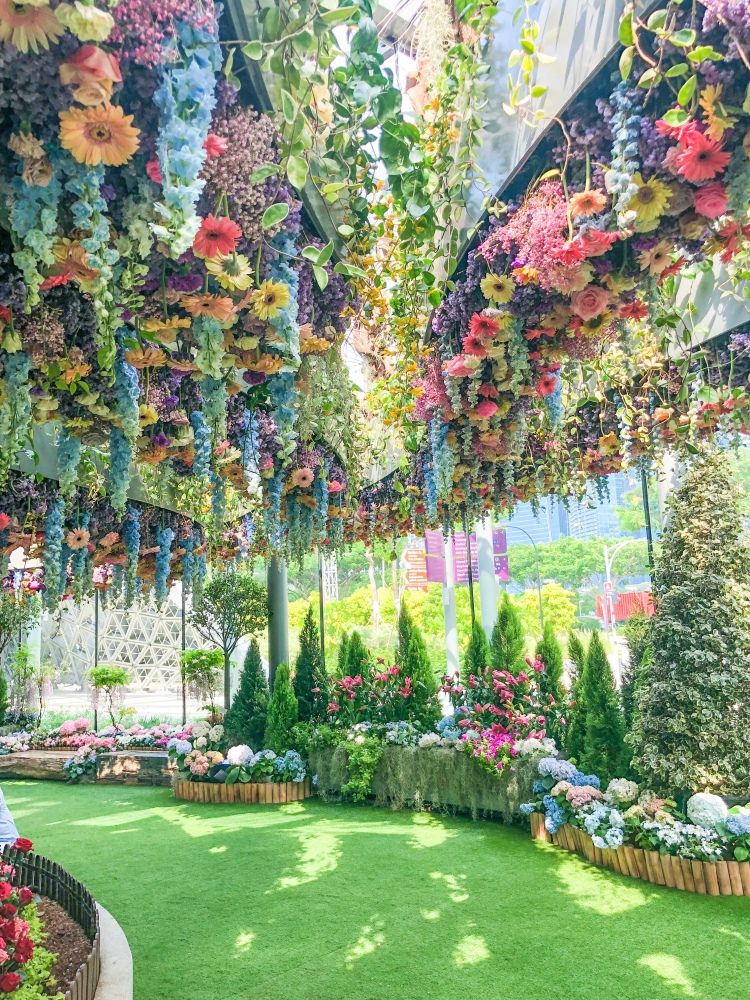 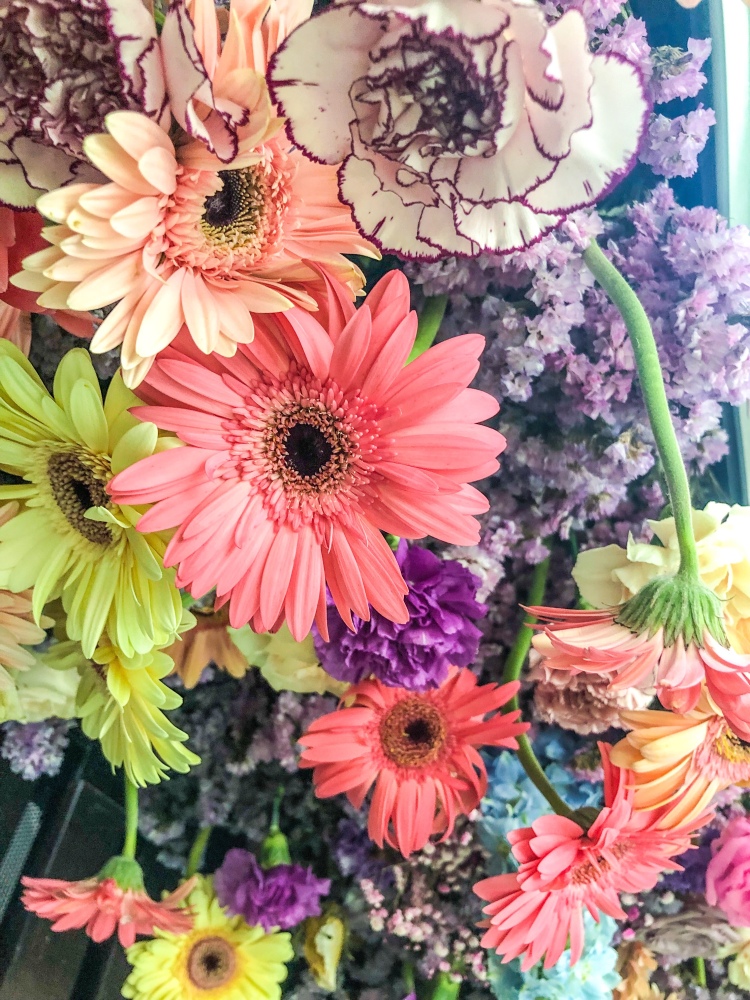 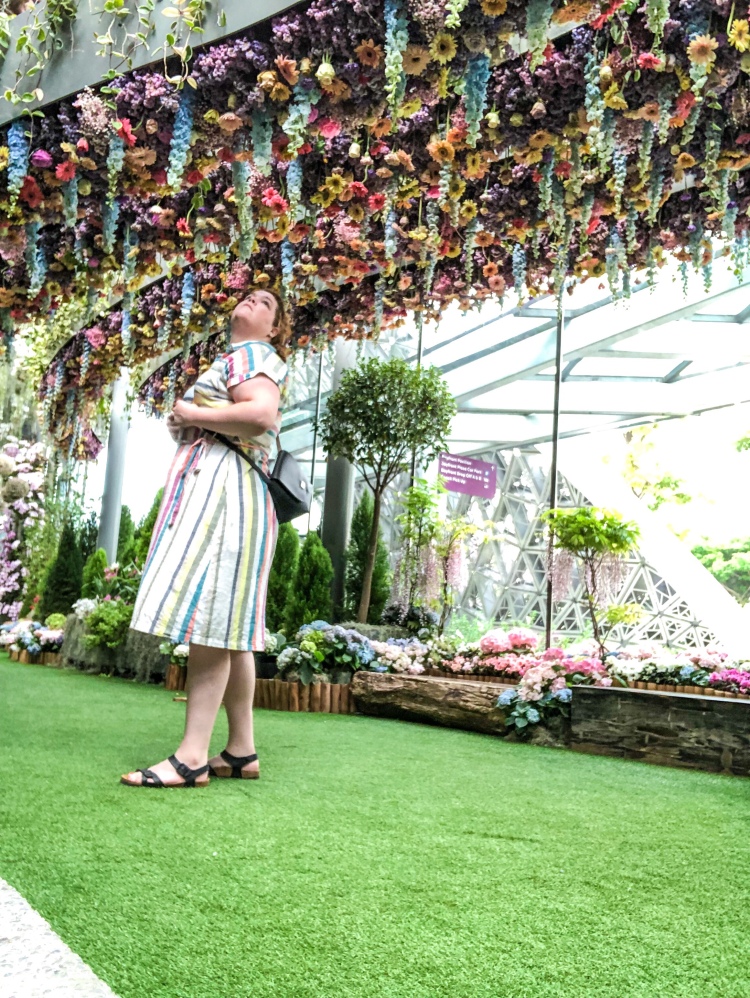 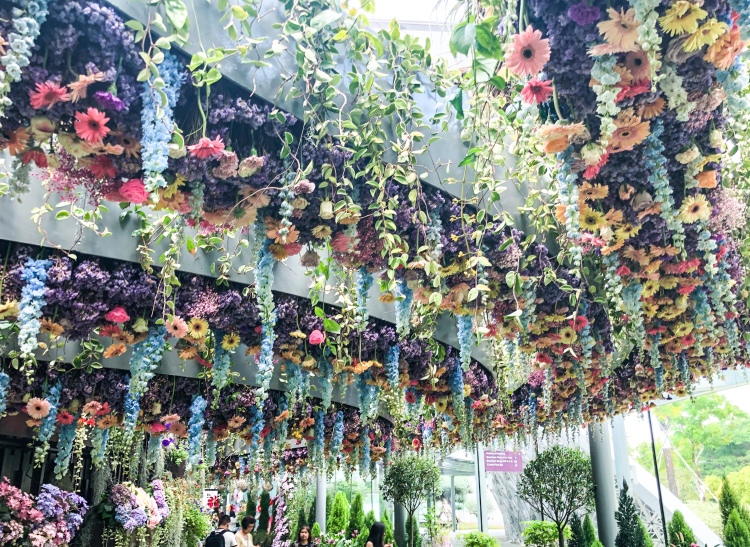 My next stop was the Science museum. located pretty close to the Gardens by the bay, I booked my ticket on Klook and saved some $$. This was one of the only times I wished I had a travel companion because this place was packed with cool Instagram worthy photo opportunities and unfortunately, I had a very hard time finding anyone that would snap a photo for me. My favorite room was the hundreds of little mirrors hanging on strings, it was so soothing and memorizing! Thankfully I got the guy working to snap some pretty awesome shots of me! 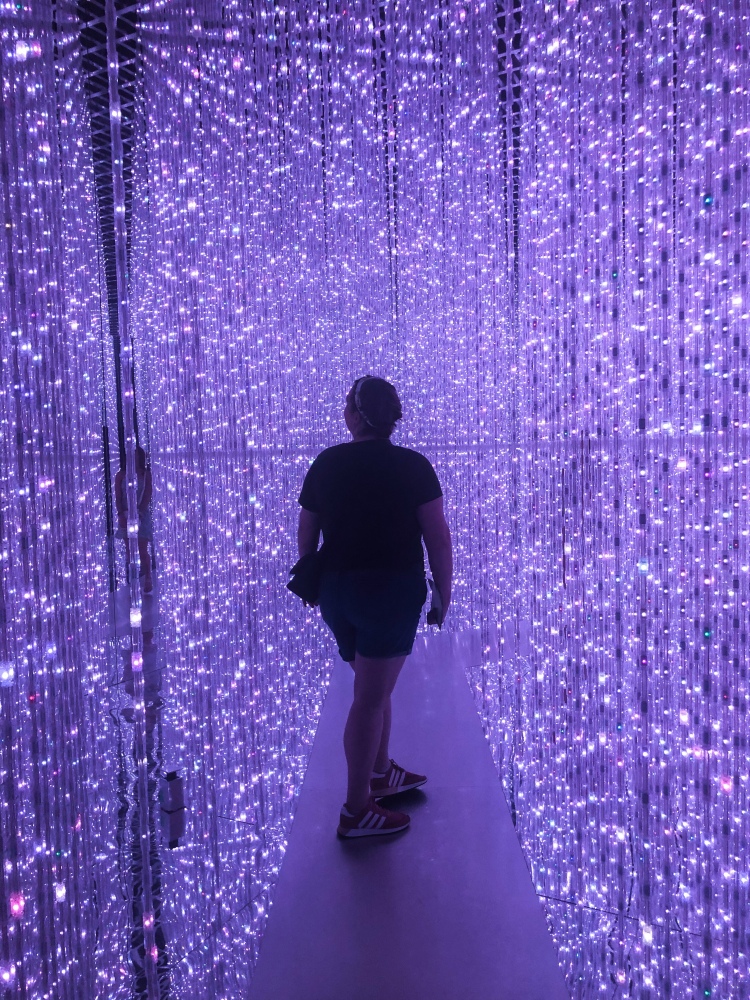 I usually like to just wander around a new city with no plans but it was so so so hot! I’m an early bird so I would get up as soon as the sun was up and try to see as much as possible before noon and I would retreat to my hotel or mall to chill till it started to cool off in the evening. I think being sick added to the problem but I have never sweat so much doing literally nothing, It was gross! I’m not a hot weather human so when I plan another trip, I’m going to try to find a time of year that’s not scorching if that exists. When packing make sure you pack as lightweight clothing as possible, I had some sundresses and tanks that were flowy and light. Most people there seemed to be dressed to the 9’s and full fashion but I was like Nah I want to be comfortable.

Singapore is the most diverse place I have ever been to and the city is divided into different cultural centers. There are actually very few native people and the national language is English, however, I noticed that very few people use English even though they know it, making starting or joining conversations very difficult. I never felt unsafe even when walking alone at night, I did feel uncomfortable at one point in Little India that led me to leave that area but that came from my insecurity of being stared at for being different. 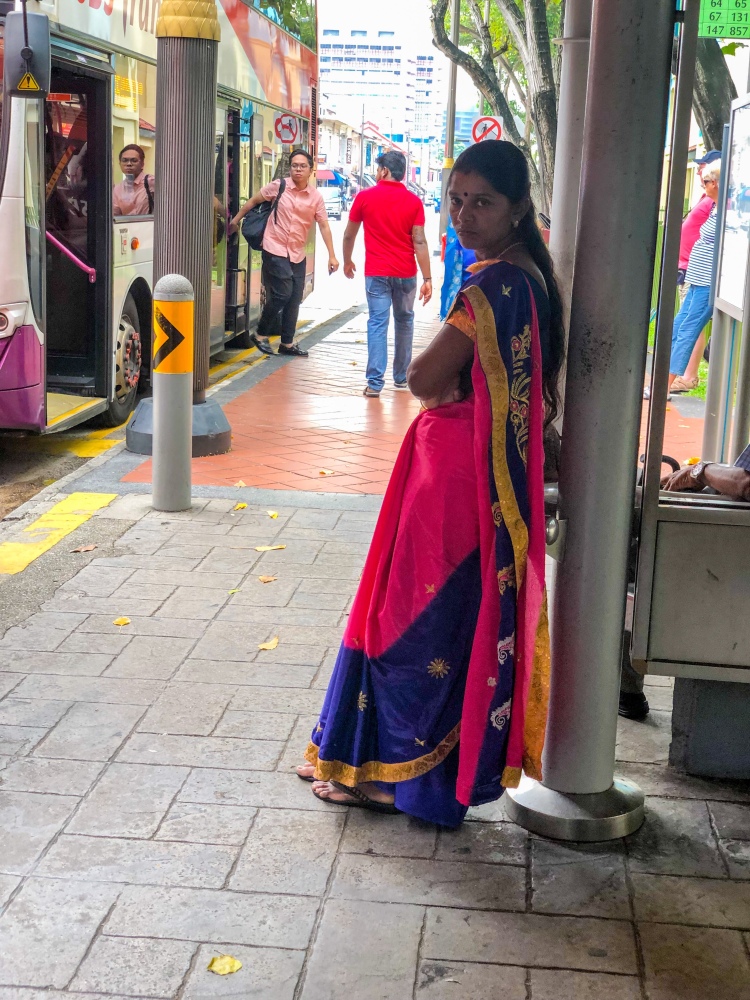 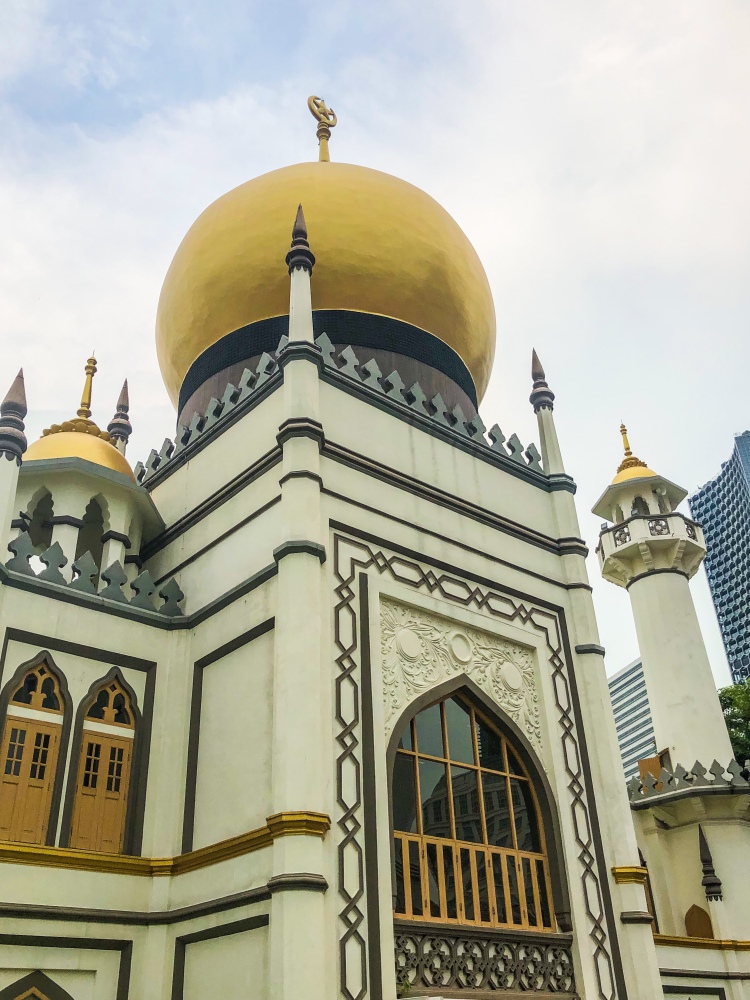 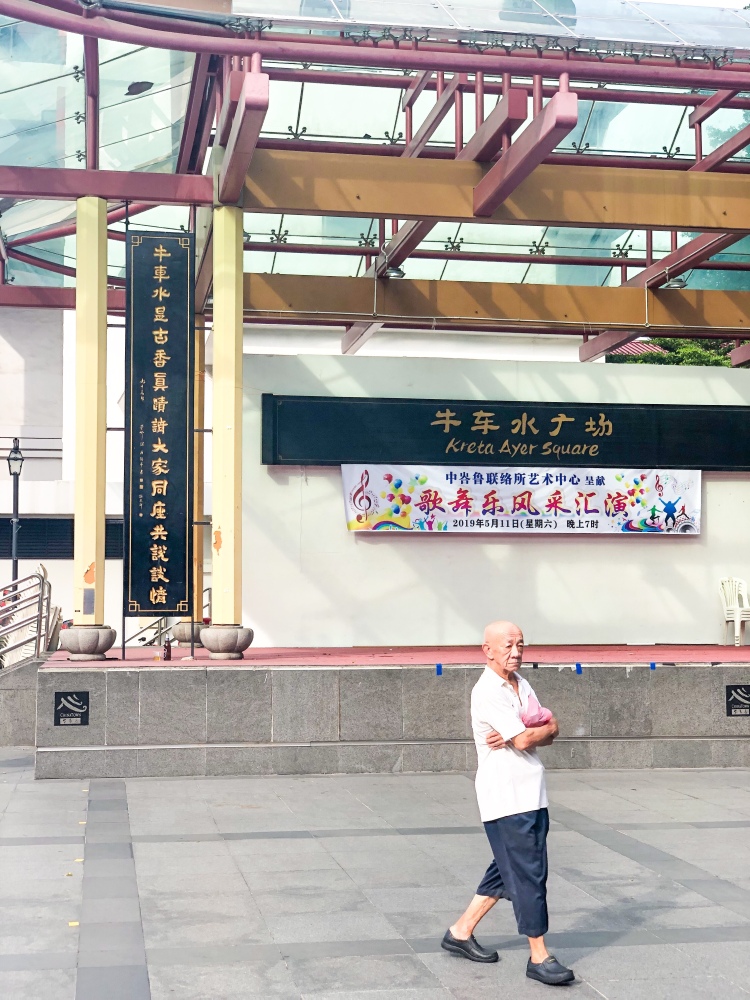 I’m a big fan of Ferris wheels and the Singapore Flyer is one of the best! On a clear day, you can see Malaysia and some Indonesian Islands. I picked the perfect time to go, there was no line and only had to share my pod with a sweet Indian family, their son was super fun and wanted to take pictures with me lol I do recommend booking ahead of time and going on a weekday will help you escape standing in a ridiculous line for hours. 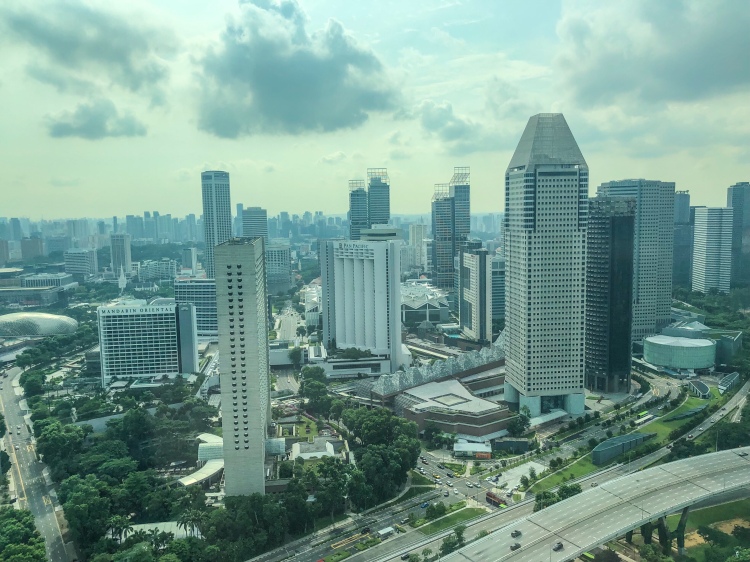 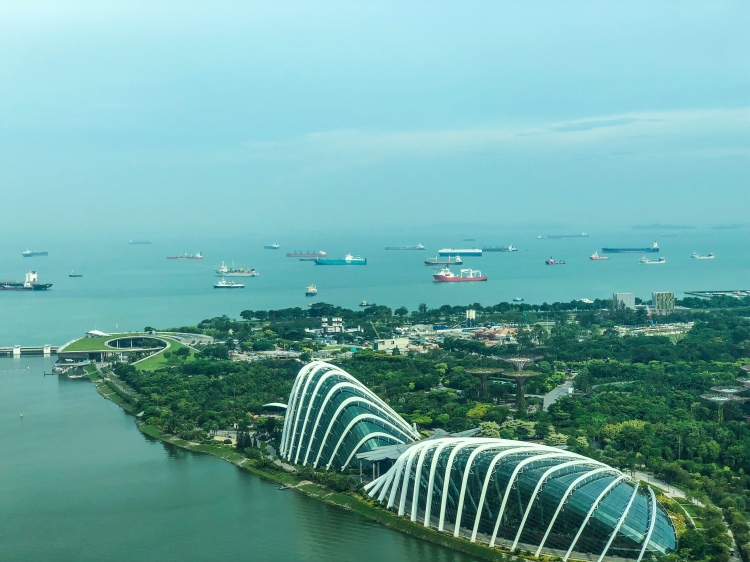 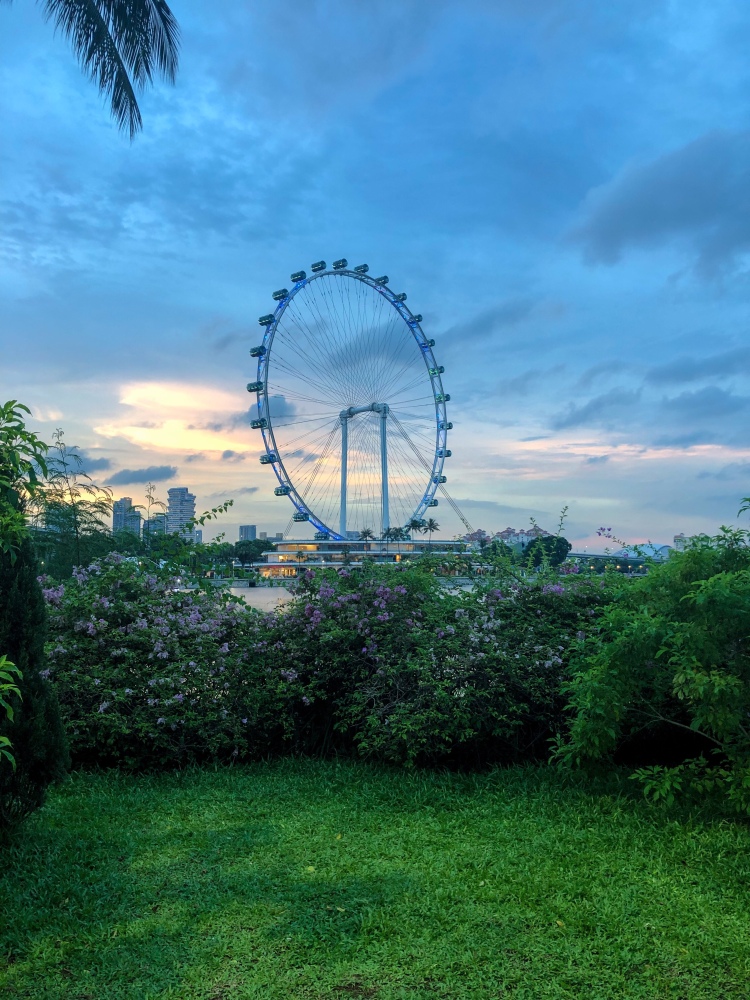 On my last day, it was a total downpour so I did my usual hop-on/hop-off bus, it was the first time in 3 days I found other tourists that openly spoke English that I could have a conversation with! What I love most about bus tours is 1. it’s great transportation through the city to all the hot spots and 2. All the great information you get from the guides, sometimes you get a live guide and sometimes a recording but they always have a ton of info about the area and fun facts. For example, I learned that it is super difficult to get a driver’s license there and insanely expensive. It’s kinda like a lottery system and this keeps their streets clear and NO TRAFFIC!!! Pretty awesome! 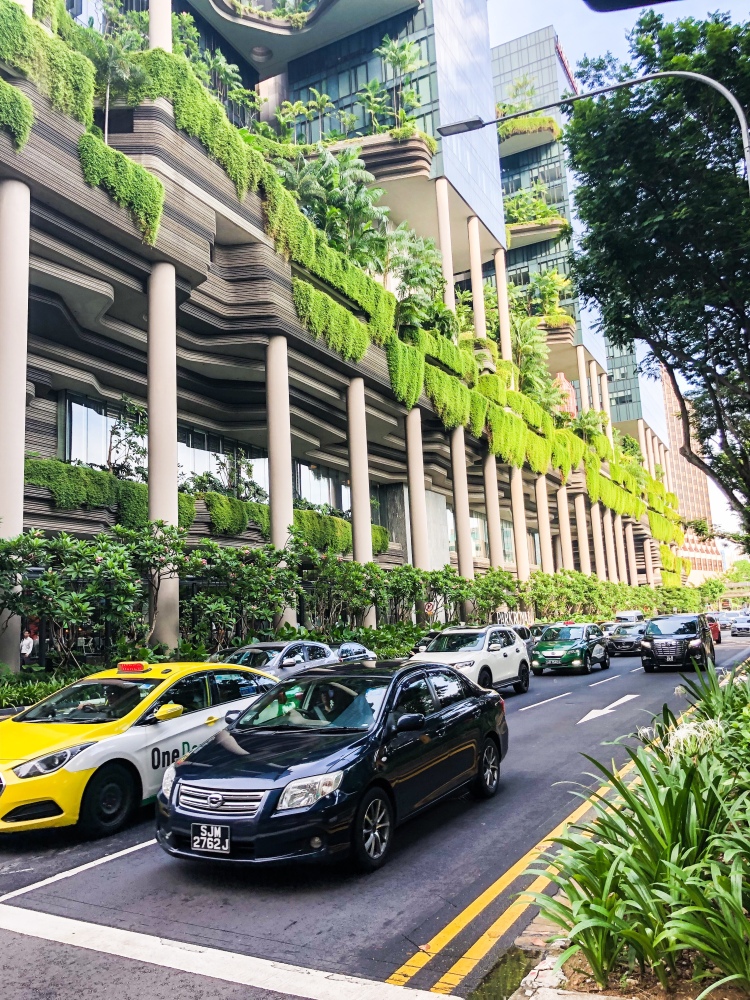 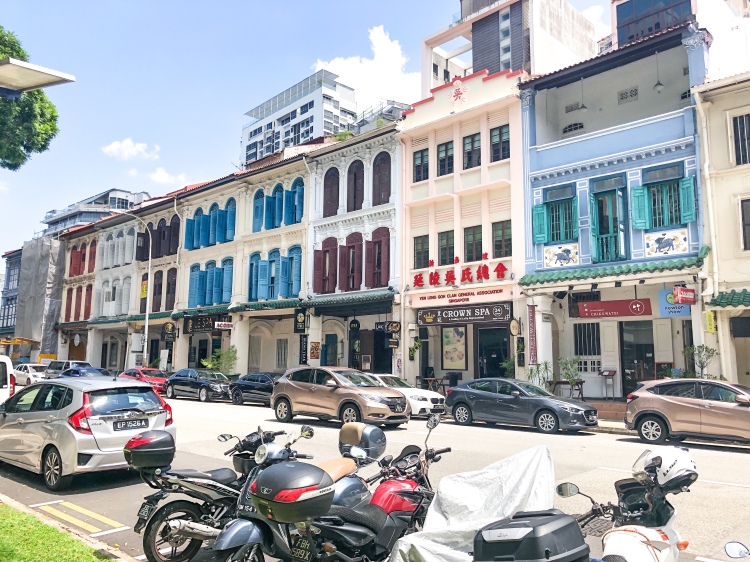 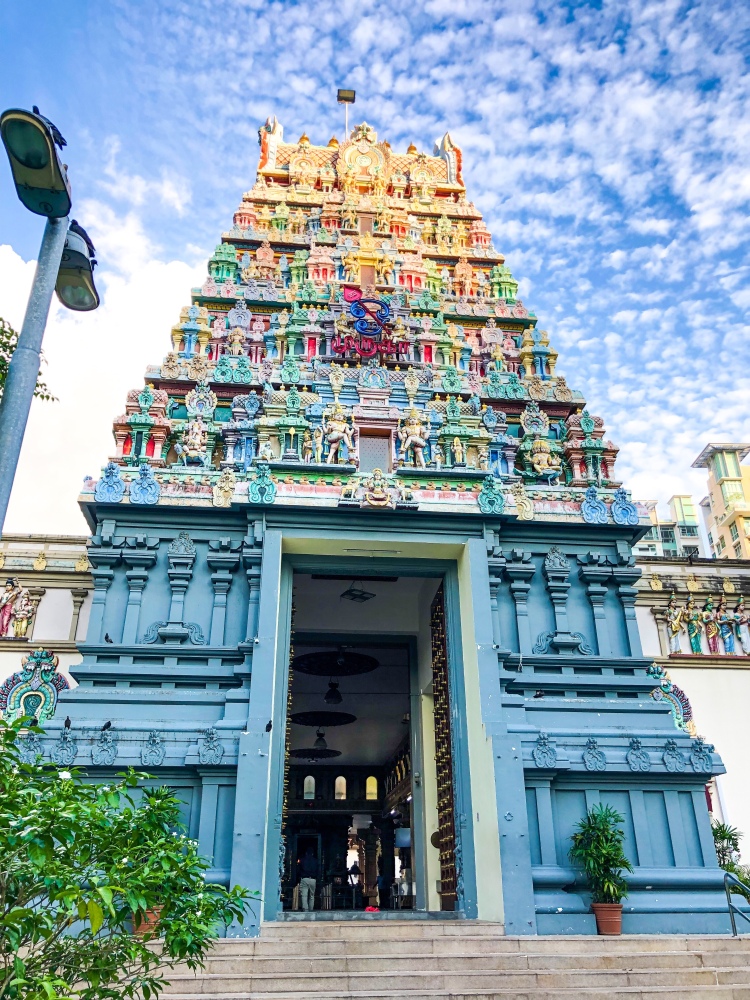 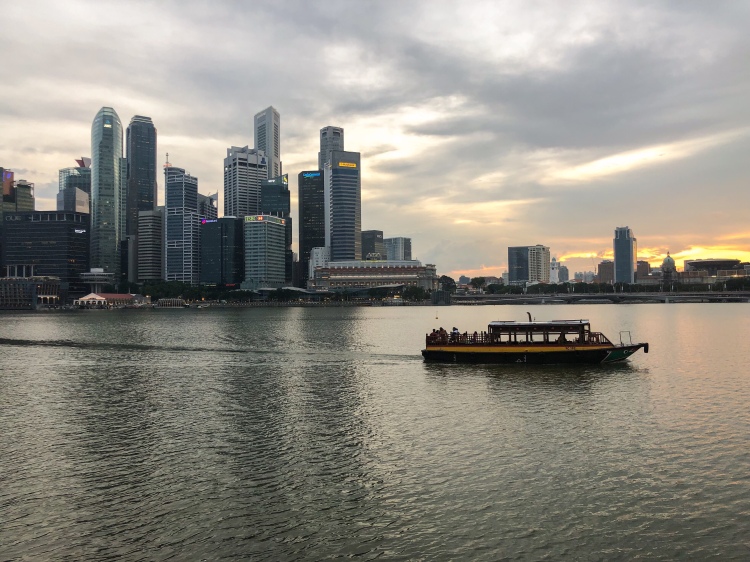 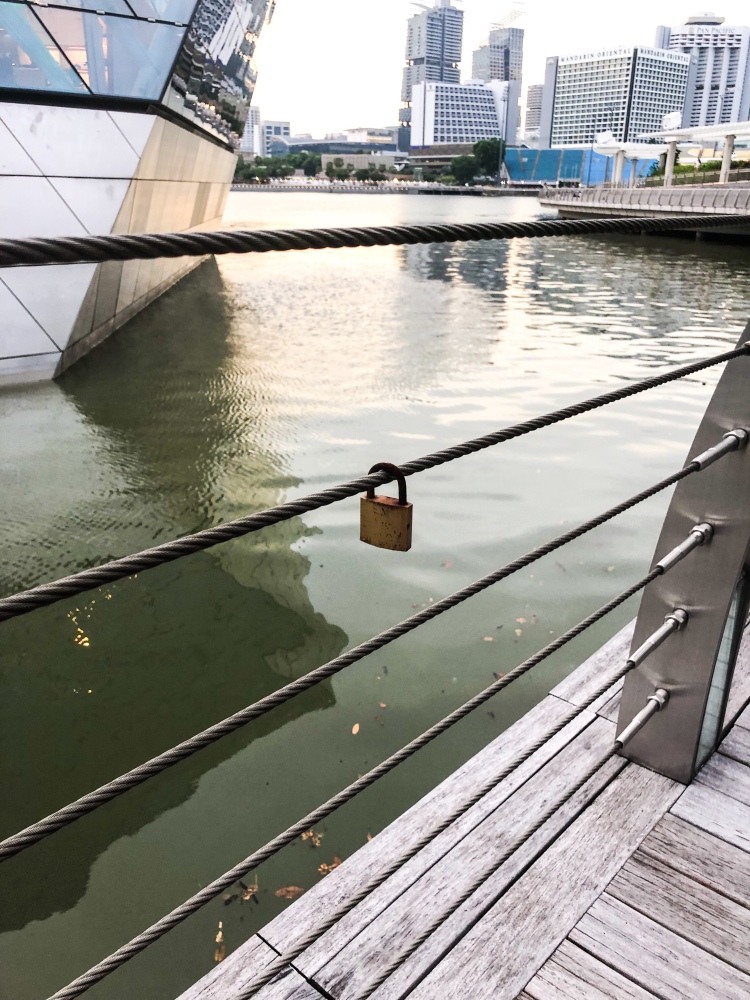 Lover of life, adventurer, daughter of the King, way tooo ADD and scattered at times. I laugh too loud, talk too much and post my entire life on social media. I'm a goal crusher, girl boss and here to change the world. I sing at the top of my lungs, drive with all the windows down and have watched pride and prejudice more then I care to admit. I belong in the mountains yet reside in the city and my hair is hard to tame. I'm random, I'm quirky, I'm just me Amanda Marie. View more posts

One thought on “Solo in Singapore”